These are my Orks preparing for battle in a game of Warhammer 40K.

See more photographs of my Orks in a variety of battle reports.

Going through some old blog posts I found that I had posted these images back in 2004. They were some of the first photographs I had taken with a DSLR of my Epic miniatures.

Most of these images used an aperture of f32 and anything up to a ten second exposure which meant using a tripod and avoiding knocking the camera.

An Imperial Bastion that is now been used by Orks.

From one of the many games at GamesDay 2008.

Orks and Grots advance, they were suppose to be defending…

This picture was taken from a recent game.

The Orks were defending the ruins of a city facing an onslaught of Imperial Guard. 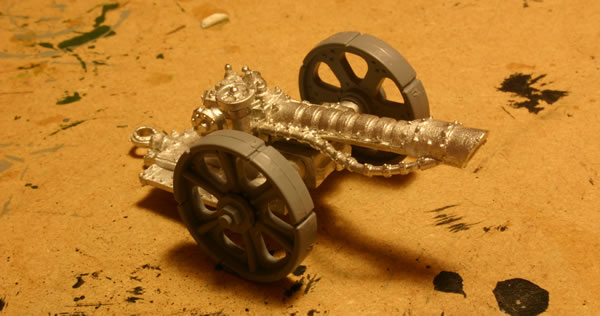 I have now undercoated the converted Orks with Heavy Weapons.

Though you can purchase Orks with Heavy Weapons, I have always liked the conversions in the Ork Codex.

Here are my first attempt at Ork with Heavy Weapon.

Basically it consists of using two Shootas to create a Big Shoota. You may also notice that the head is from the WHFB Orc Warriors sprue.

Here is another version.

Got a new camera, here are the results…

Recently acquired a Canon EOS 300D, which is a digital SLR camera, here are some of the results. Most of these images used an aperture of f32 and anything up to a ten second exposure which meant using a tripod and avoiding knocking the camera.

This was an interesting game. Simon had just finished his 40K scale Forgeworld Valkyrie and wanted to use it in a game. Knowing his “luck” I expected that the Valkyrie would fly in and one of my grots would take a shot and shoot it down… at which point Simon would be slightly annoyed!

Therefore I created this scenario which has forty Imperial Guard, with Heavy Weapons, a Tarantula Sentry Gun but no tanks. They would be dug into one end of the table and their objective was to get at least twenty troops off the table.

They would be taken off table by a flight of Valkyries that would fly in, strafe the Orks before landing, allowing the Imperial Guard to embark and fly off.

My Orks job to stop all this!