During the dark days of 1940, Britain was under dire threat of Nazi invasion. A massive citizen army, the Local Defence Volunteers, was raised to defend their families and homes. Although armed with old or ad hoc weapons and equipment the Home Guard, as it became known, was a vital part of the defence of British shores.

Based on these proud defenders of the realm, the classic TV series, Dad’s Army produced some of television’s most enduring catchphrases and characters as it followed the adventures of Walmington-on-Sea’s Home Guard platoon. 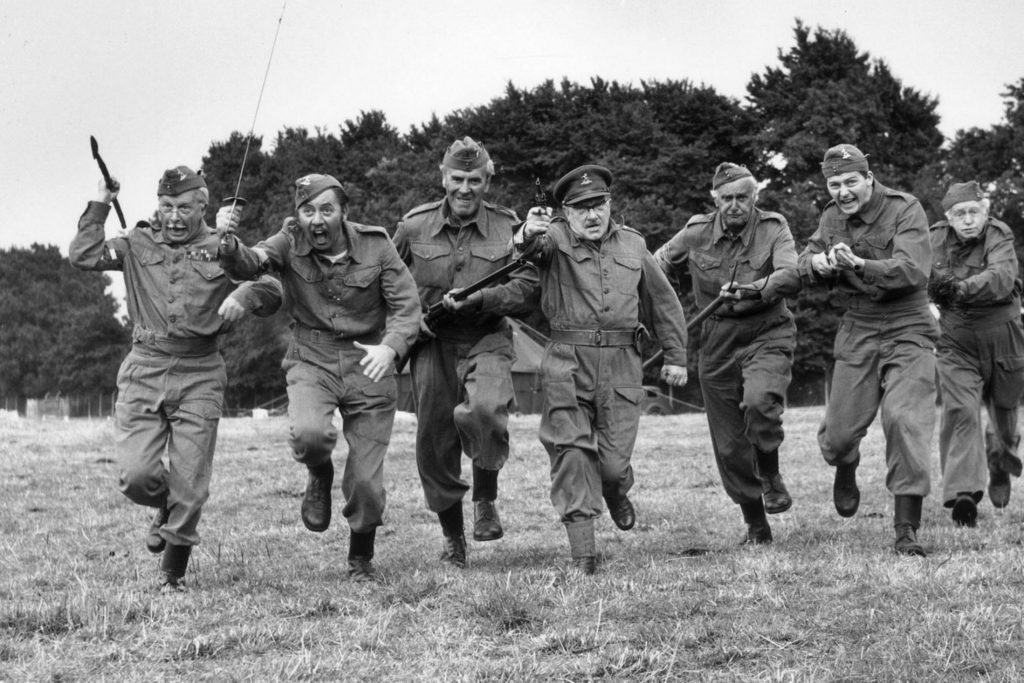 You get the Home Guard characters in both uniform and civilian attire.

The box is filled with two blisters, which for some reason I found quite surprising.

I was also slightly surprised to find the models used slottabases. I was though inspired by the promotional images, I decded for the civilian models I would texture the bases as though they were on paved paths using Green Stuff.

Here is a close up of one of the bases. I never would admit to been an expert green stuff sculpter.

Alongside Reverend Timothy Farthing is Maurice Yeatman the Verger.

Of course one of the main characters is George Mainwaring the bank manager of Walmington-on-Sea.

Frank Pike stands ready to face the enemy with a cricket bat.

William Hodges runs the local greengrocer and he really doesn’t get on with Captain George Mainwaring.

James Frazer armed with a pitchfork.

Private Frank Pike was a cosseted mother’s boy and often the target of Mainwaring’s derision (“You stupid boy”), was a junior bank clerk.

Private James Frazer was a dour Scottish coffin maker and a retired Chief Petty Officer in the Royal Navy who fought at the Battle of Jutland (although as a cook). Frazer was blunt, tight with money, and had a gloomy outlook on life; he would proclaim “We’re doomed!” during bleak moments faced by the platoon.

Lance-Corporal Jack Jones was the oldest member of the platoon (born 1870), but was played by Clive Dunn, who was in his forties when he took the role. Jones was an old campaigner who had joined the British Army as a boy soldier and served under Kitchener of Khartoum in the Sudan between 1896 and 1898, the Boer War, and the First World War. By 1940 he worked as the town butcher, which enabled him to occasionally supplement his superiors’ meat ration. Jones was leader of the platoon’s first section.

Chief ARP Warden William Hodges was born in 1887 and is Mainwaring’s main rival in Walmington-on-Sea. A greengrocer by trade, following outbreak of war he has been given power as Chief Air Raid Warden, and that power has gone to his head. He can be as pompous and officious as Mainwaring, but is more uncouth and coarse.

Jack Jones is the town butcher.

Arthur Wilson works as a bank clerk in the same bank as Mainwaring.

Here is Captain George Mainwaring. He was the pompous – if essentially brave and unerringly patriotic – local bank manager. Mainwaring appointed himself leader of his town’s contingent of Local Defence Volunteers.

Sergeant Arthur Wilson was a diffident, upper-class bank clerk and Mainwaring’s inferior in the bank and on parade. Nevertheless, his suave, understated social superiority, public school education and handsome looks led to a certain amount of jealousy on Mainwaring’s part, which Wilson was never particularly bothered by. He would also subtly question Mainwaring’s judgement by asking “do you think that’s wise, Sir?” after Mainwaring had given an instruction.

Private Joe Walker was a black market “spiv” (he called himself a “wholesale supplier”), Walker was the only fit, able-bodied man of military age in Walmington-on-Sea’s home guard. His absence from the regular armed forces was due to a corned beef allergy, although it was implied that Walker had probably found a way to play the system.

Private Charles Godfrey was the most frail member of the platoon, and was the platoon’s medical orderly. He had served in the First World War as a conscientious-objecting stretcher bearer in the Royal Army Medical Corps, winning the Military Medal before becoming a tailor at the Army & Navy Stores.

The models were then given a white undercoat.